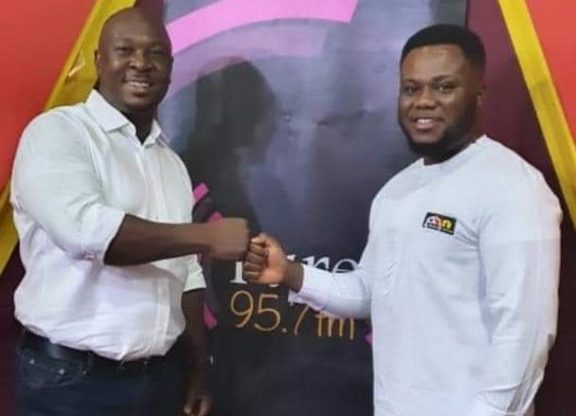 Celebrated sports broadcaster, Bright Kankam Boadu is taking over the sports fraternity in the Garden City of Kumasi by storm today Monday August 24, 2020 as he begins his first ever show on Pure 95.7 FM, a subsidiary of the Angel Broadcasting Network (ABN).

BKB as he is affectionately called, was ushered into his first ever show by the Chief Executive Officer of the Angel Broadcasting Network (ABN), Mr. Samuel Kofi Acheampong popularly known as Bronzy Teflon and Prophet Agaspa with an opening prayer.

Also joined is the magnificent Coach Ignatius who comes on the Pure Sports team as a resource person to assist the crew as far as tactical issues are concerned.

Attended by close associates and some top radio industry players like King Eben and Collins Clancy Atta Poku of Wontumi Sports, Richardo Suarez Pepe of Kumasi FM also used the opportunity welcome the new sports team back to the fraternity.

Heavily graced the show was the popular jama group, Moral.com who did jama interesting songs on the show to officially launch the new Sports programme.

One of Kumasi’s favourite Oliver Kahn was also on the show to officially welcome the new sports crew with his usual antics.

The event was moderated by the former host of Nhyira Sports show and now the host of the station’s flagship sports show dubbed ‘Pure Sports’ – Bright Kankam Boadu, whom this website had long ago said he was joining.

The highly influential sports personality who has been assigned as the new head of Sports at Pure FM promised to deliver nothing but the best to the people of Kumasi and Ghana as a whole.

Bright Kankam Boadu and his new sports crew comes on your airwaves from Monday to Friday between the hours of 10am and 12noon as well 3pm to 4pm.

Congratulations to the entire crew on their new journey!