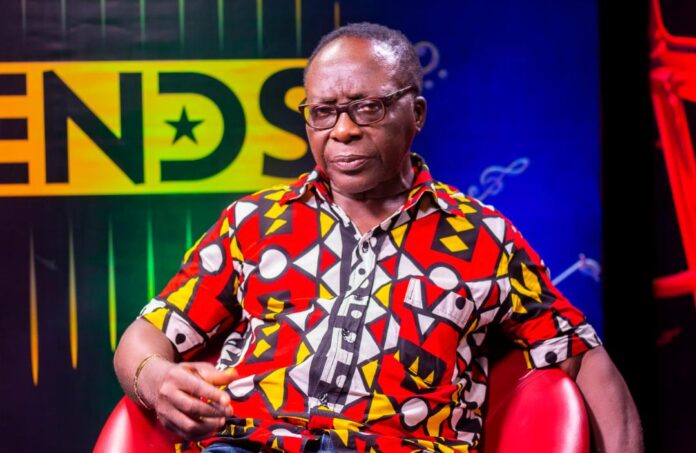 Ace broadcaster, Amankwah Ampofo, has divulged despite helping in the establishment of two major stations in the country the owners turned their back on him.

The legendary broadcaster said he acted as the media consultant for Abeka Junction-based Peace FM and Global Media Aliance-owned Happy FM free of charge with the promise of being employed thereafter but the owners were not true to their words.

Joining Agyemang Prempeh on the latest episode of Legends on TV XYZ which aired on Sunday, 2 August 2020, Amankwah Ampofo who seems unhappy with the treatment meted out to him by the media organisations said he holds no grudge against them.

The GBC trained media practitioner disclosed he was instrumental in the formation of the radio station which has Dr Osei Kwame Despite as its Chief Executive Officer.

According to him, before the Akan-speaking radio station would hit the airwaves in the late 90s he was involved in every decision taken to make it a success.

“I will say I started Peace FM. I didn’t join them but I played a major role in building the station. I met with Despite. He would call me and arrange a meeting. When he comes from Kumasi he calls me, he had a one room at Asylum Down. I don’t want to go into details.

“He calls and tells me the latest development to the point when he wanted to employ (late) Afia Konadu. He asked me about Afia Konadu and I told him ‘we’re in the same office. So, no problem’ as time went on he dropped me. I’d say the engineer who imported their equipments into the country, Mr Nsiah I introduced him to (late) Kwasi Brenya. So, I was part of it only that when it got to some point my name got lost,” he said.

Asked if he tried to find out why he was not employed, the celebrated radio and television personality with four decades of experience in the Ghanaian media space replied in the negative suggesting they didn’t need his service.

“If they call you to work with them then you join. But if you started with them and they’re no longer involving you what would you do?” he quizzed.

He added, “I don’t know, I don’t want to go into that. I have not asked them for the past many years.”

Amankwah Ampofo stated that legendary Highlife singer, Nana Kwame Ampadu, who was also involved in the establishment of the station can bear witness to the fact of the matter.

“Nana Ampadu knows [about it] if you like ask him. The two of us met severally to discuss about the formation of the station at Okaishie where Despite had his office. Every afternoon Nana Ampadu and I sat. When they said they want a programme outline we drew the programme before they were given the frequency.

“Ask Nana Ampadu I don’t want to go further. Very fortunate Nana Ampadu is alive, Kwasi Brenya is no more. They know about it. I and Nana Ampadu drafted the programme and handed it over to Despite. I know Nana Ampadu is connected with the frequency.”

The retired anchorman, however, mentioned that he cannot “tell” why the owners of Peace FM breached the verbal agreement and failed to comply with the terms of the contract.

Similarly, he intimated he played a role in the establishment of Happy FM but his dream of working with the station which has “Anigye Nkoaa” as its tagline never materialized.

Speaking on the Legends programme on TV XYZ, Mr Ampofo recounts how he was approached to help build the radio station and the subsequent private meetings he had with the owners of station.

Mr Ampofo, who was honoured with a state award in 2008 by President John Agyekum Kufuor, the Grand Medal (Media), for his contribution to the development of the media in Ghana narrates, “Kingsman, I was his voice over artiste. So, when he decided to set up a radio station I was the first person he contacted. The day he received the letter telling him he’s been given a frequency, there was a place at Holland Embassy around the GBC called 4As, a drinking spot. That was where he called me to. Mr Agyemang called me he’s been given the frequency. We held several meetings. I called Abena Otwiwaah she’s passed on. Then Kumisey, he was the engineer at GBC we went to his office and a mutual agreement was reached.

“We’d call him once in a while and he will assured us of the job. Intially, he wanted to purchase a house at Odorkor but I told him FM station needs small house to function so he stopped. I was working with him then one day I heard he had employed Sekyere Boateng from GBC, Kumasi. But originally, he wanted to poach Fiifi Banson and Kwame Sefa Kayi from Peace FM but all his attempts proved futile.”

The 67-year-old retired broadcast journalist recalls the appointment of Sekyere Boateng to the position of the General Manager blocked his chances of working with Happy FM.

He revealed that after Sekyere assumed office he told owners of the station he cannot work with him. Hence their decision not to employ him.

“according to Kingsley, Sekeyre said he can’t work with me. I said no problem. That’s why I’m going healthy I don’t hold grudges against others.”

Born to John Arthur Ampofo from Antoa in the Ashanti Region and Rebecca Odi Johnson of Obosomase, Akuapem, in the Eastern Region, Mr Ampofo said he was not hurt by Sekyere’s decision.

In his assertion, perhaps he was thrown under the bus because he is a native Akuapim speaker and the radio owners do not want such language on their platforms.

He asserted, “It occurred to me I asked myself maybe they don’t like the Akuapim dialect. Everyone decides what he or she wants to do. Whatever you want to do fine, but I know I’m shrewd and intelligent”

Amankwah Ampofo joined the Ghana Broadcasting Corporation as a production assistant and rose through the ranks to become the Chief Controller of Programmes and Head of the Akan Section of GBC.

Prior to joining the GBC, he was an artiste who founded the Kyirem Cultural Group and trained many young boys and girls in drama and culture.

Among the awards he won in his glittering career were the ECRAG “Best Juvenile Group of Youth and Students (1978),” ECRAG “Talent of the year (1984) and ECRAG Play of the Year (1996) with “Not This Time”.

Christened Charles Ampofo travelled widely, taking his Kyirem Cultural Group to World Youth Festivals in Cuba (1978), Bulgaria (1979) and Moscow (Russia) in 1985. He also travelled to Canada with the Obra Group that included Ajoa Smart and Grace Omaboe in 1999 at the invitation of the Ghanaian Community in Canada.

“No not at all I call myself multi-talented I can easily go that way. As I was saying I was doing culture I didn’t start with radio so if someone sabotages me I don’t care.”