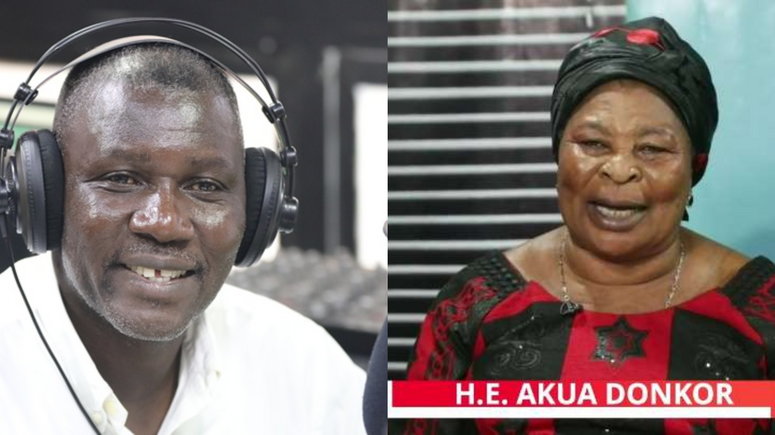 Veteran journalist, Adakabre Frimpong Manso, has accepted Akua Donkor’s invitation to be her running mate for the December general election, Angelonline.com has confirmed.

The leader and founder of Ghana Freedom Party (GFP), Akua Donkor had exclusively disclosed on Angel 102.9 FM evening news on Thursday, July 9, 2020 that she has settled on Adakabre as her running mate.

“Akua Donkor came to me with the proposition that I should be her running mate. In light of that, I am with her; we are united to work”, Adakabre said in Twi.

According to him, Akua Donkor represents greater women empowerment in Ghana. Therefore, she needs coaching and direction to reach her targeted groups; (that is) market women, cocoa farmers, teachers and single mothers.

He emphasized the need for a good communicator to couch the goodwill messages of Akua Donkor to the masses to win their trust and support.

He believes that the vision of Akua Donkor is a shared vision and with the right support, she would perform wonders in representing the needs and ambitions of the youth and take the nation to the ‘promised land’.

The name of the party is Ghana Freedom Party, as captured in the nation’s Coat of Arms, signifying that every Ghanaian deserves that freedom to develop their potential, he noted.

Founder and Leader of Ghana Freedom Party (GFP), Akua Donkor, confessed that should I join her in the race, my presence (as a journalist and transport operator) would attract some credible persons and other people who might write her off (for fear that she’s not a literate),” Adakabre revealed.

He also disclosed that a lot of ‘big men’ have called on him to rally behind Akua Donkor to boost the party’s credibility and image.

He further appealed to his colleague journalists, such as Captain Smart and Kofi Adoma, to support the GFP come election 2020.