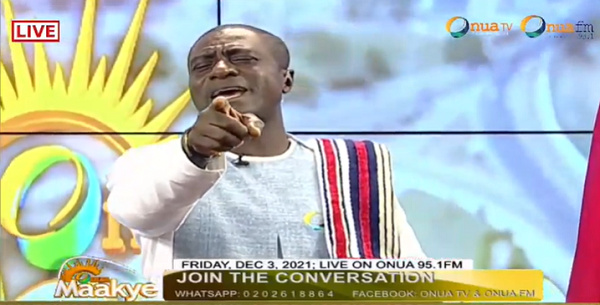 Inarguably, one of the journalists who has the most live social media views is Onua FM/TV’s Captain Smart.

In an exclusive chit-chat on the Peace FM’s Entertainment Review on Saturday, he revealed those outrageous social views on Captain Smart’s show are all ‘Inorganic’ views and that he is the hand behind that.

He however demonstrated on the show by taking live views on the Entertainment Review from 700 to 3.1K views.

“We are the ones who boost the views for Captain Smart’s show. His views are not real live views. The real views he gets are around 900- 1000. This can get me into a lot of trouble but I have to speak the truth.

“I want Captain Smart to hear this. I met him at Media General. I went there so that he will advertise my services. I asked him how much he charges for advertisement and the price he mentioned was outrageous. He thought the service I was about to do was not possible so I wanted to prove it to him. The first time I proved my service to him, he got 10, 000 views and it was all over. On that same day, he called me and congratulated me. He actually did not pay me after that.”