Head of News at Citi FM , Vivian Kai Lokko, has emerged The Most Outstanding Female

She was adjudged “the best for her deep understanding of business, financial and economic issues in Ghana,” organizers of the program said.

Mrs. Kai Lokko, who was recently elevated to the Head of News position at Citi FM, was the Head of Citi Business News, one of the few women to have headed a business news department in the Ghanaian media space. 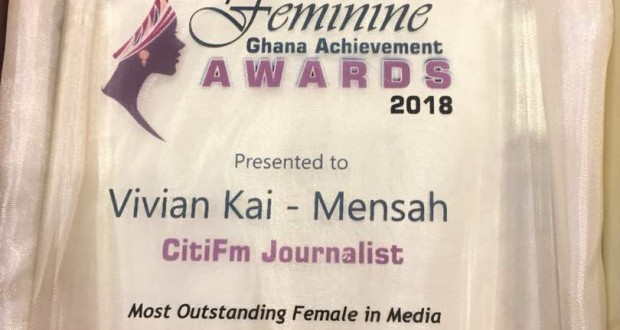 The awards is aimed at celebrating and rewarding women whose personal and professional conduct have been exemplary and outstanding.

It also seeks to publicly recognize women in Ghana who have achieved outstanding accomplishments in various forms of endeavor across the public and private sectors.

CEO of the Business Executive Magazine, organizers of the award, Paulette Kporo, also said the idea is to encourage women to take key roles in national development.

“Women have huge roles to play in achieving our collective national aspirations and it is time for us to step up to the plate” she said.

Lifetime Award for Excellence was awarded to Gifty Anti, CEO of GDA Concepts.

Founder of the Butterfly Effect, an NGO, Auguster Asantewa Boateng, also won the Most Outstanding Female Personality in Education.