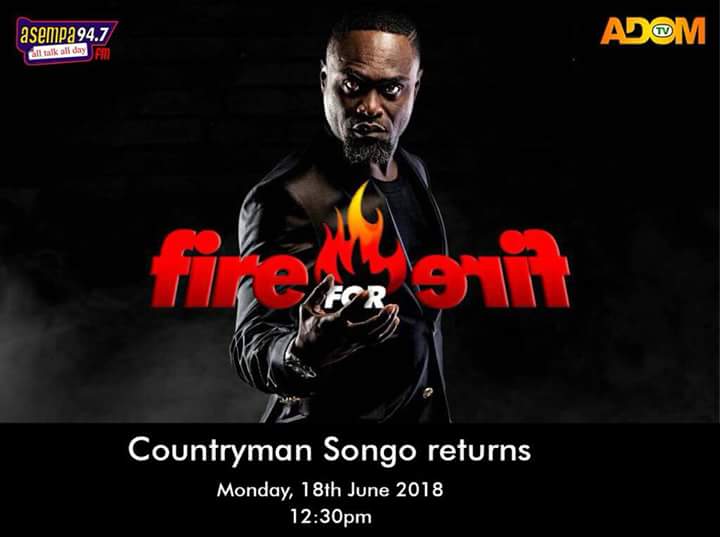 After the Nyantakyi arrest following the corrupt investigation which was undertaken by the ace investigative journalist, Anas Aremeyaw Anas into the Ghana Football Association, one person whose name has been on the lips of every Ghanaian is maverick Ghanaians sports presenter, Patrick Osei Agyeman popularly known as Countryman Songo.

Songo has been very instrumental always barking at Kwesi Nyantakyi for the poor performance of the Ghana Premier League.

Country Man Songo was taken off the screens of Adom TV and his show ‘Fire For Fire’ which is the most watched sports show on TV in Ghana hosted by his colleagues after the presenter rained several insults on the former President of the Ghana Football Association.

According to sources, the former President of the Ghana Football Association, Kwesi Nyantakyi allegedly asked that he is taken off air or he sues the company to the tune of two hundred million Ghana cedis.

This portal, www.mediafillasgh.com can authoritatively state that the Countryman Songo will return to your screens, Adom TV for the first time in many months on Monday June 18, 2018 between the hours of 12.30pm and 2pm.

However, from a post by his colleague at the Multimedia Group, Gary Al Smith, it appears the “Fire Man” as he is affectionately called will be back on air to provide his viewers with hot sizzling content on sports.