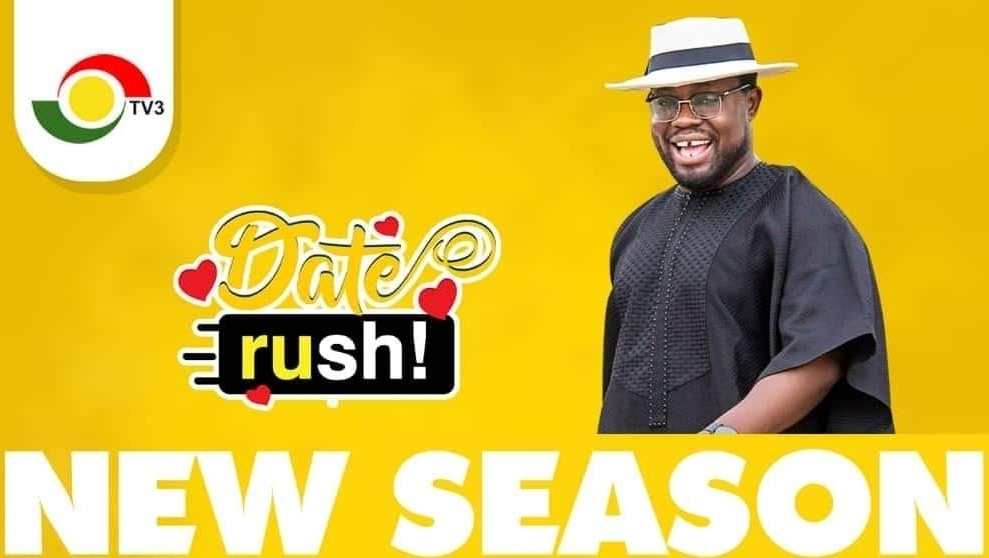 Host of the 3FM Drive Giovani Caleb has been unveiled as the new host of the Season IV of the much anticipated reality dating show on TV3, Date Rush.

The popularly acclaimed dating reality show which brings male and female participants from all walks of life and parts of Ghana on one stage to be hitched together as potential love birds, is back with a new season  this year.

The new season will be hosted by the captivating Giovanni Caleb who promises the new season of the Date Rush to be revamped even better with beautiful, sexy ladies and suave “six-packed” guys on the new season.

“This is not the Giovanni you see every Friday, all jumpy and all sweaty, this time I’m here to find love for somebody, so the serious side of me comes to play here as well” Giovani told TV3’s Anita Akuffo during the launch of the new season on Sunday January 3.

The previous seasons of the Date Rush which witnessed the emergence of participants like Ignatius, Ezekiel, Ellen, Anita and Emefa was hosted by the suave Nii Kpakpo Thompson and received popular acclaim by viewers and audience who cannot wait for the newly revamped season on TV3.

The highly rated reality show promises to come back with a highly produced season with participants scouted from all over the country, with better appeal and class than the previous seasons.

Head of marketing for Media General, Gideon Agyemang stated that the new season will have the celebrity episode where celebrities will be on the show trying their luck for love on the much anticipated show. He also declared that there will be the ‘Love Retreat’ and the ‘Love Carnival’, where there will be “kissing booths” on the streets coming up on the newly revamped season.

The Head of Entertainment and Events at the Media General Nana Kwadwo Addo promised the new season to be “double overdose”, exciting, and captivating than the previous seasons.

He said the award-winning reality show stands for the staunch belief that everybody deserves  love and to be loved, love is a beautiful thing and it is a thousand degrees and a thousand percent on the Date Rush reality show.

“One of the best things to happen during the lockdown is the Date Rush reality show, that’s why we have improved the content by introducing a new host Giovanni Caleb. This is going to be an exciting season of Date Rush, I can assure you of that” declared Francis Doku, General Manager, TV Media Genera