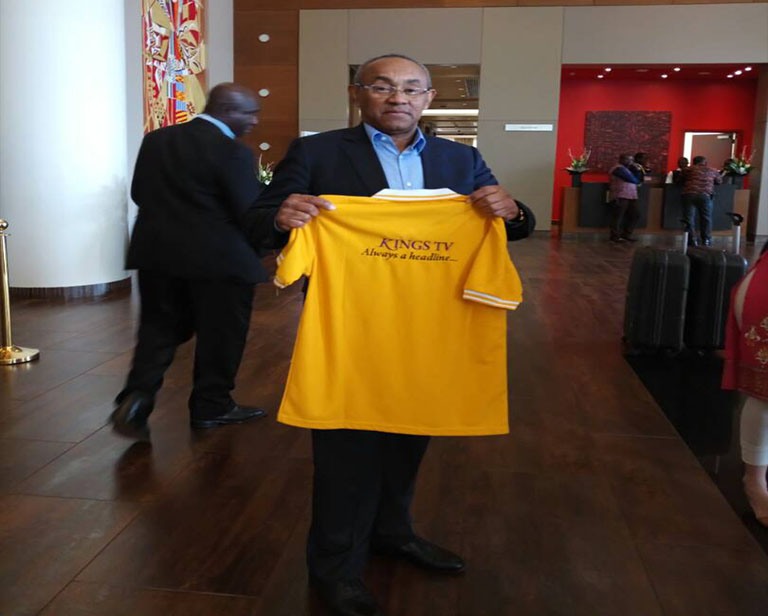 And yes, believe it or not this portal, www.mediafillasgh.com can state that the President of the Confederation of African Football (CAF), Ahmad Ahmad has exclusively endorsed the new online TV, KINGS TV.

Over the weekend a picture of the President of the CAF was seen in a photograph holding an officially-branded polo shirt of “KINGS TV” with a huge smile on his face.

The photograph that has been gone viral especially on social media is generating all the hypes and many applause it deserves  and continues to generate massive talk and discussions all over the country and beyond.

In an exclusive discourse with the CEO of the New Online TV brand, he said Mr. Ahmad’s decision to publicly endorse KINGS TV was not because of his relationship with him but the very great initiative the soon-to-come TV station brings on board.

Ahmad Ahmad (born 30 December 1959) is a Malagasy football administrator (currently in his third period of office). He was a politician back home after being both a football player and coach in his younger days. Since 2003, he is the president of Malagasy Football Federation.

He played for Club des Finances de Antananarivo and AC Sotema Mahajanga, both in Madagascar in his younger days but was not ever selected for the national team.

He was originally a football coach. From 2003, he was president of the Malagasy Football Federation. On March 16, 2017, he was elected as the 7th President of the Confederation of African Football by winning against Issa Hayatou, who has been in office since 1988 with 34 votes against 20.  Before then, he was a member of the Caf Executive Committee.

Kings TV will operate an eclectic mix of 70% sports news and 30% entertainment, social and politics contents.  The Online TV’s tagline is “Always A Headline”. Kings TV is set to roll out very soon and can be enjoyed on YouTube.

Remember to Subscribe to our official social media handles below: