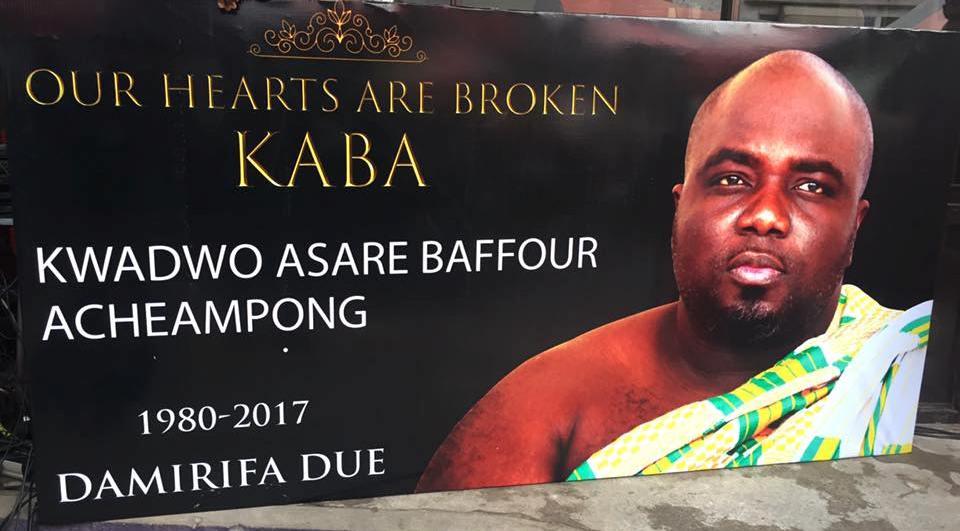 The Final Funeral rites for ace broadcaster, Kwadwo Asare Baffour-Acheampong affectionately known in the media fratenity as KABA has been scheduled for Saturday December 16, 2017.

The burial is expected to take place at Akwamu-Adumasa in the Eastern region. The decision to bury him at Adumasa was influenced by the fact that he was from a royal family and would, therefore, be appropriate to be buried in his hometown.

The burial arrangements were made at a family meeting on Wednesday which was attended by the father of KABA. Kwadwo Asare-Baffuor Acheampong died in the early hours of Saturday, November 18, 2017, at the Korle Bu Teaching Hospital after a recurring illness. Until his death, he was the regular host of ‘Ekosii Sen’, a popular political talk show on Accra-based Asempa FM.

A day before his death, KABA reported to work but was asked to go home because he was not looking well, only for him to be rushed to the hospital on Saturday where he was pronounced dead.

KABA left behind a wife Valentina Ofori Afriyie (a colleague journalist with Accra based Class FM), and a seven-month old baby girl.

His one week celebration will take place on Saturday, November 25, 2017 where details of the final funeral rites would officially be announced.