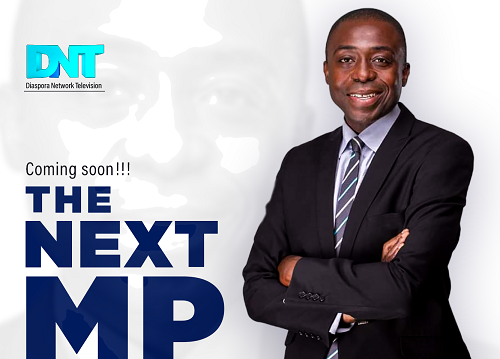 Award-winning broadcaster Kafui Dey, formerly with EIB Network has joined the fast-growing Diaspora Network Television (DNT), a new satellite television station in Accra focusing on highlighting news and events about Africans in the diaspora and also being the credible reference point for untainted news from Africa.

With close to forty (40) correspondents across the globe reporting events concerning Ghanaians and Africans, DNT is positioned as the voice of all Africans in the Diaspora.

Kafui Dey became a household name when he hosted three (3) seasons of Who Wants To Be Rich, Ghana franchise of international game show Who Wants To Be A Millionaire. He has interviewed over 1,000 guests from politics, business and entertainment and clearly distinguished himself as the first host of GH Today, morning show on GHOne TV and First host of Starr Today, morning show on Starr 103.5 FM in Accra.

He joins this fast-growing network with vast experience in broadcasting and marketing. “I’m thrilled to be part of DNT because of the unique opportunity to contribute to an exciting vision. It’s all about possibilities”, Kafui said.

Expressing his excitement about Kafui Dey joining the DNT family, General Manager Yaw Sakyi Afari said “I have known Kafui Dey for two decades and so fully aware of the value he brings to this journey. We are very excited to have him believe in this vision to fully represent Ghanaians and Africans in the diaspora sharing their dreams and expectations as they seek to return to their motherland at some point to help with nation-building”.

The CEO and President of Diaspora Network Television (DNT) Jermaine Nkrumah who is a known advocate for diaspora engagement said: “unbeknownst to much of the Ghanaian public, Kafui Dey lived in Beijing, China and London, UK in his early childhood days so he embodies the diaspora story that we refer to at DNT and so when he decided to come on board this journey to connect the diaspora to the African continent much more effectively, we couldn’t contain our excitement”.

Mr. Dey will host a new show called “The Next MP” on his new home channel. With Ghanaians going to the polls in December 2020 to elect their members of Parliament and President, Kafui Dey’s first task on DNT is to help electorates with FACTS about the various aspirants to decide who to vote for. Starting this June, Kafui will host several of these aspirants on the show. The show will also air on DNT’s youtube channel (Diaspora Network Television) and Facebook page (DNTGhana).