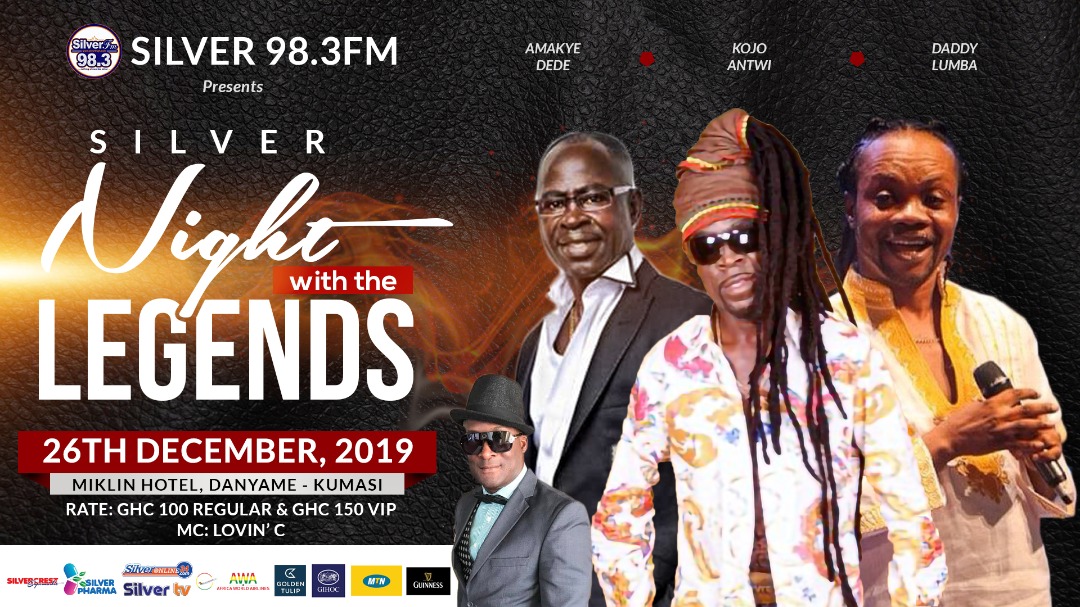 Silver 98.3FM proudly presents ‘Night with the Legends’ all in the name of bringing the legends home to thrill audience to some of their hit songs.

Daddy Lumba will definitely make the audience call for more of his countless tunes. He is known for his “borga highlife” songs such  ‘Anidasoɔ Wɔhɔ Ma Obiara’, ‘Ohia Asɛm’, Ɛmmere Pa Bɛba’, ‘Agya Bi Wua Agya Bi Tease’  Woho kyere, Sesei wo Se, Poison, Ye Nee Wo ho Beto Wo, which became very popular among Ghanaians in Europe especially those in Germany. He has been consistent with the release of multiple-hit albums since then and has established himself as one of Ghana’s most popular singers of his genre, highlife.

With an exciting and successful musical career spanning over two decades, Kojo Antwi has established himself as a consummate vocalist; a prolific songwriter, producer and arranger; and an enigmatic performer. He has delighted lovers of good music such as Mmrika, Adienpena, Tom and Jerry, Adinkra, Meye Osaman, Asabone, with his clear and flawlessly seductive voice that radiates through his massive repertoire of smooth and sultry ballads.

According to organizers of the event, these legends were lined-up together due to their immense contribution to the Ghanaian music industry hence the decision to create a platform to have close interactions with their fans.

Fans are expected to grab their tickets at the premises of Silver FM before the due date to avoid disappointments at respective gates.