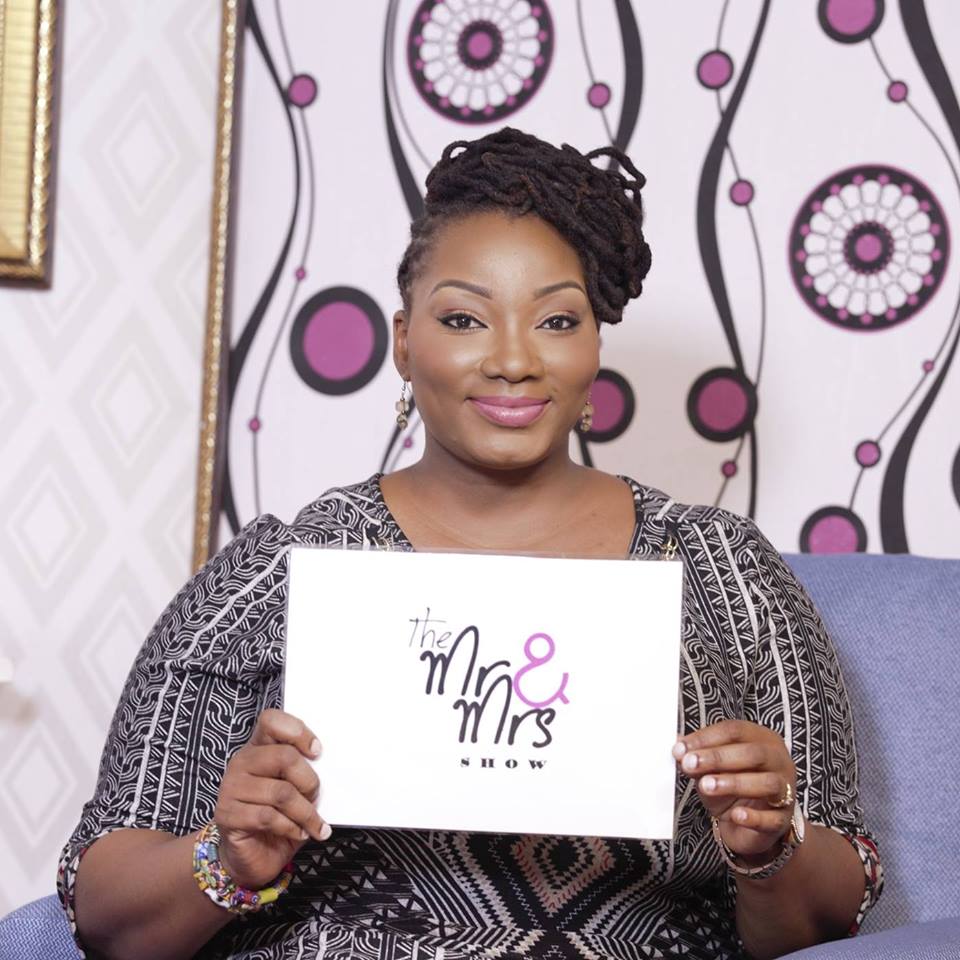 Sundays at  8pm on Multi TV, MEDIAFILLASGH.com can confirm.

Mr and Mrs Show is a marriage TV talk show which gives platform to married couples as to how to handle and manage problems in marriages.

One thing about Kokui Selormey that many people do not know is the fact that she is a daughter of the late Deputy Minister of Finance, Victor Selormey. It is always said that for a person to be on the screens, that person needs to have good looks but I believe it goes beyond that.

For this week’s edition, MEDIAFILLASGH celebrates Kokui Selormey, a beautiful lady and one who is also intelligent. She has that pretty face that is able to hold her viewers spell bound on TV. 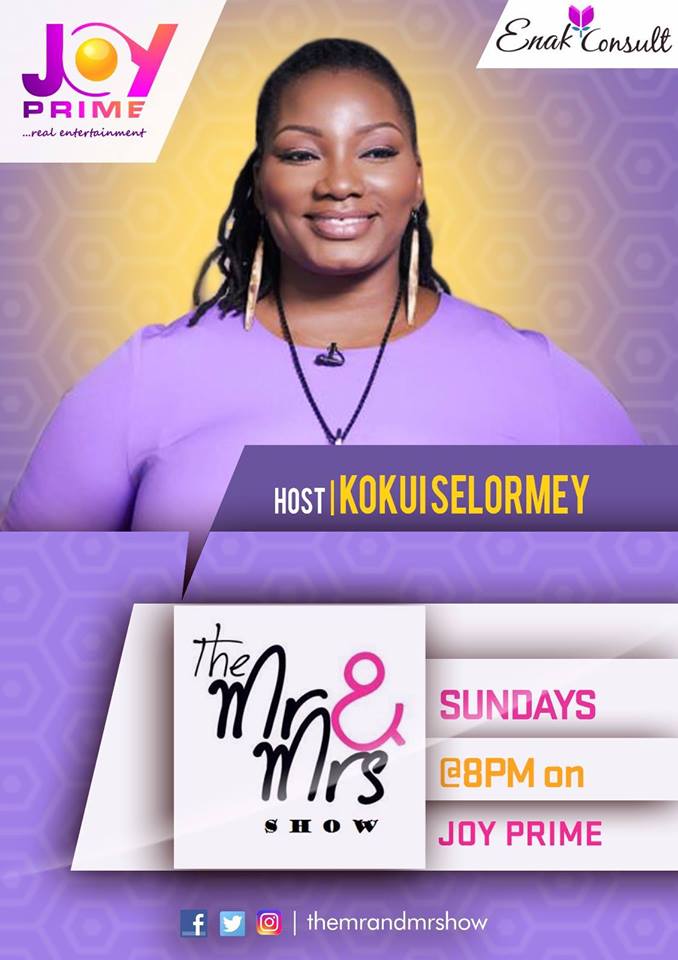 Kokui was born on November 4, 1978 in Accra Ghana, but when she was only six months old, she had to leave her mother and elder brother for the United Kingdom to stay with her dad.

While there she got her first taste of being on stage. She was about 8 years old when she was chosen to play a small role in the Christmas play at her primary school. She basically had one line to say in the whole show.

One day, her director pulled her aside to tell her that one of the lead characters; the innkeeper, [who was female in this play], would not be able to do the role anymore, so she asked if Kokui could take over.

Kokui already knew the part as if she had played it a thousand times. She always felt comfortable on stage, more so than in her everyday life. Acting felt so natural to her and she blossomed with each performance.

She returned 10 years later to continue her education in Ghana, which she said she found quite difficult to adjust. She was enrolled at the Ridge Church School in Accra. When she enrolled at Ridge Church School, she quickly had to adapt to life as a Ghanaian and generally, she was a good student and was quick in making new friends in school.

She later moved on to the Holy Child Senior High School in Cape Coast where she joined the school’s choir in her first year.

Aside from the fact that it was a performance opportunity, she was attracted by the chance for choir members to take trips to other schools, mainly St. Augustine’s College for concerts.

She always had a good ear for music and she was able to pick up songs very quickly. In her second year, the Director of her school awarded her with the coveted prize for best scola cantorum member.

By that time, she had also forged a close friendship with two of her Holy Child sisters, Natasha Gwira and Nana Ajua Mensah- Brown. The three of them formed their own performance group, which was fashioned after the popular American group; Sisters with Voices [SWV].

They rehearsed and choreographed several routines to perform at fun fairs and other social events at our neighboring institutions.

Soon, they built quite a reputation among Cape Coast peers but Kokui didn’t let her love for performing interfere with her studies. After finishing at the top of her class in the Senior Secondary Certificate Examination [SSCE], she moved to the United States to continue my education.

Kokui did some additional studies at the Allen Academy in Texas prior to applying to university. While at Allen, she joined the school choir to fulfill her extracurricular activities requirement. Her choir director noticed that her voice seemed to possess a special quality and natural beauty and she was encouraged to audition for a slot in the Texas All- State Choir, which comprised of young singers from all over the state.

She was selected as one of the Alto singers for the Texas All- State Choir. After her All-State Choir experience, she worked up the nerve to compete in the Texas Private and Parochial Schools vocal competition in her region and ended up winning the second place medal.

She was accepted to the prestigious Spelman College in Atlanta, Georgia. Her intention was to pursue a course of study that would prepare her for law school, so she selected Political Science as her major.

She thought of becoming an Entertainment Lawyer and after examining her options, she decided to pursue a double-major in Political Science and music

Her intention was to go to Law School, but she obviously never set foot in the Political Science Department, so her focus was on graduate schools for music. She graduated from Spelman and in the fall of 2001, she enrolled at NEC and began her next course of study.

She graduated in May, 2003 with a Master’s Degree in Music and that was when she truly began to understand that music was going to be her career. She has plans of working on some fusion music with her classical training and African highlife, hiplife, pop and hip hop music

She returned to Ghana in 2009 to settle down and worked in the Civil Service of Ghana but had to leave after six months.

She is happily married to Kobby Hanson who she describes as a loving man and an absolute good father to their children. They were friends back in high school and reconnected after 10 years of losing contact. He attended Saint Augustine’s Senior High School and moved to Britain thereafter.

They are blessed with three boys. Not only does she see her husband as loving; she describes her husband as a fantastic cook and a superb father and a person who is able to support and encourage her in whatever she does.

Apart from being a TV Personality, Selormey is also an avid singer whose melodious voice always holds her audience spellbound. Just like other people, she initially had ambitions of becoming a lawyer but rather chose to study music.

In the field of music, she auditioned for the X-factor singing reality television show and had sailed through to the next stage.

One of the highlights in her music career was to record an album on Christmas with Hugh Masekela, the renowned South African musician of international repute. That album was produced by Mr James Atu Scot Benin with support from the Ridge Church.

Despite her love for music, at a point in time, Kokui decided to switch to television programming and even before that, she had researched into Ghana’s entertainment industry and had realized that there was a huge opportunity in that sector.

Subsequently, she applied to be a presenter on a new television programme called Healthline that was sponsored by Vodafone Ghana and got the position. It was her husband, who was then working with Vodafone who encouraged her to go for the audition. She was the host for the Season One of the programme and later did the voice over for Season Two and Three.

Sometime later, she had a job opportunity at Citi FM to host the Breakfast Show. Still in search of further opportunities, she moved to Viasat 1 as the host of This Morning, to partner with Patrice Amegashie.

As a mother, wife and a career woman, Kokui has managed over the years to take care of her home even though it’s not that easy combining that with work especially when she has to wake up very early in the morning to prepare for work and return to the house very tired and exhausted.

‘It has not been easy but I am surrounded by wonderful people who help me out’, she said.According to Kokui, she is sometimes hard-pressed for space and time such that she has to take her five-month old baby to work when her mother, husband or mother-in-law are not available.

In her leisure time, Kokui loves to read and write or go to the movies with her husband. She also loves to spend much time with her children despite her busy schedule. ‘My journey continues now and I’m grateful for the opportunities and training I’ve had in this field.

I’m mostly grateful to God for His gift to me and to my parents for their love and for always supporting me even when they had their doubts about me pursuing music as a career’, she said.

She believes God does not give more than one can handle. She advised that as humans, we ought to do our best in life. She said she believed in asking for help when the need arose.’If you have to leave a mark, leave a good one so that when you are no more, you will be remembered for your good works,’ she said.