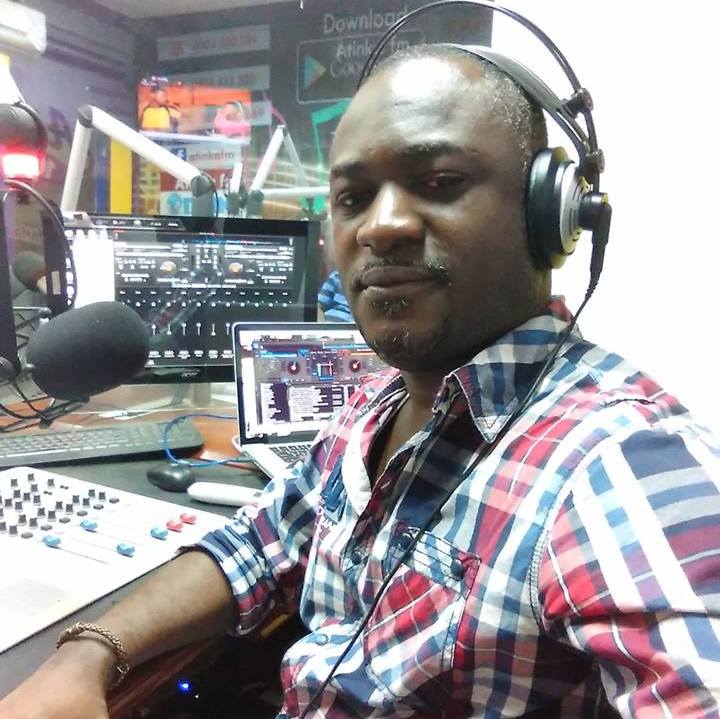 For many ardent listeners of Atinka 104.7 FM, the name “Candy Man” rings a bell; indeed it’s a name synonymous with good music and melodious tunes.
As the name connotes, he plays sweet music soothing to the ears, making the station’s ever-growing audience stay glued to their sets.

His real name is Alexander Kwaku Amoah but Candy man is his claim to fame.  DJ Candyman, as he popularly called hails from Adansi Fomena in the Ashanti region aside radio is an entrepreneur, a peer educator and an entertainment pundit.

He has served as volunteer in many non-governmental health projects like Malaria and cholera awareness programmes, polio immunizations, HIV/ AIDS peer education.

He is referred to as the music historian due to his vast knowledge in music and the history of musicians from 1960’s to the millennium. The rich collection of songs in his music library and song bank has earned him a lot of respect amongst his peers.

His love for good music during his secondary school days earned him the sweet nickname, Candy Man which happens to be the stage name of Candell Manson, an American rapper and record producer who is best known for his hit single, “Knockin’ Boots”.

“I got the name Candy Man because I could do a good rendition of his track, “Knockin’ Boots. A friend of mine who was so fascinated about my ability to perform the song gave me the name,” He told this portal.
The celebrated Disc Jockey is celebrated twenty-one years in Radio Disc Jocking.
The lover of music who started his Radio DJ life in the year 1997, was introduced into radio Disc Jockey by a friend, said his journey into the radio disc jockeying was not all that glossy as one would perceive it to be.
“I had my ups and downs in the business when I started and there were times where I ended up in trouble because I was insisting that the right thing was done but I almost lost my job and thanks to God this is how far I’ve come,” he said.
According to him, he started his career as a normal DJ but was later introduced to radio ‘DJing’ by a friend.
“I was introduced into the radio business by a friend, Kwame Adjeitia (AK47) currently at Peace FM when I was in Kumasi when he realized my exclusiveness in music selection and the love I had for my job” he said.
The renowned DJ, who hosts Atinka FM’s “After Drive” programme between 7pm and 10 pm Monday to Friday, wanted to be engineer when he was a young lad. No wonder he got enrolled in Kumasi Polytechnic to pursue a course in Motor Vehicle Mechanics (MVM).
However, it appears his love music and entertainment in general, diverted his career path. “My interest in music and disc jockeying began in 1994 when I was about 18 years old. Luckily there was a recording studio close to my house so I took advantage by spending time there frequently to practice after school,” he recalled.
He worked with Radio Lynk Kumasi Poly campus, Shalom Radio Berekum, Fox FM Kumasi, Hello FM Kumasi, Rainbow Radio Accra before settling in Atinka FM currently and for every second, he never had any time of regret in discharging his duties, though he had to go back to his freelance ‘DJing’.
“I had to return to Kumasi after working with Shalom Radio for only four months because of some personal issues I had at that time”.
At Kumasi Polytechnic, Candy Man got the opportunity to work as a radio DJ with Radio Link, a campus radio. This laid the foundation for his radio career. “For me, working with Radio Link was quite easy for me due to my previous experience as a budding DJ playing at the parties, outdooring and so on,” he recounted.
Prior to joining Radio Link, Candy Man became the first DJ to be hired by the Kumasi based Owner services, a company specialized in various entertainment activities such as spinning, renting of canopies etc .
Candyman hosted the mid- morning programme on Radio link and later promoted to host the station’s evening drive for two years. He later had stints with Fox FM, Hello FM, Rainbow Radio and now Atinka 107.4 where he joined in 2015. He was also the senior DJ at Foxtrap Night Club while at Fox FM.
DJ Candyman who has trained the likes of DJ Chifaro, DJ Warren, DJ Allan Cash and a host of others, encouraged young and upcoming DJs to stay focus and believe in what they do.
He has tagged “Position is not Possession” as his favourite quote and that is what inspires him as a humble personality, admonishing all Ghanaians to embrace his favorite words.

DJ Candyman is a single parent and has a beautiful 7-year-old daughter he loves so much.

Make a date with him on the Akwaaba show on Accra based Atinka FM from Monday to Friday between 7pm and 10pm . Also, don’t forget to tune in to the Personality profile show dubbed Akwaaba Talk this and every Friday from 7pm to 10pm live on Atinka 104.7FM.
Video excerpts of the Akwaaba show: