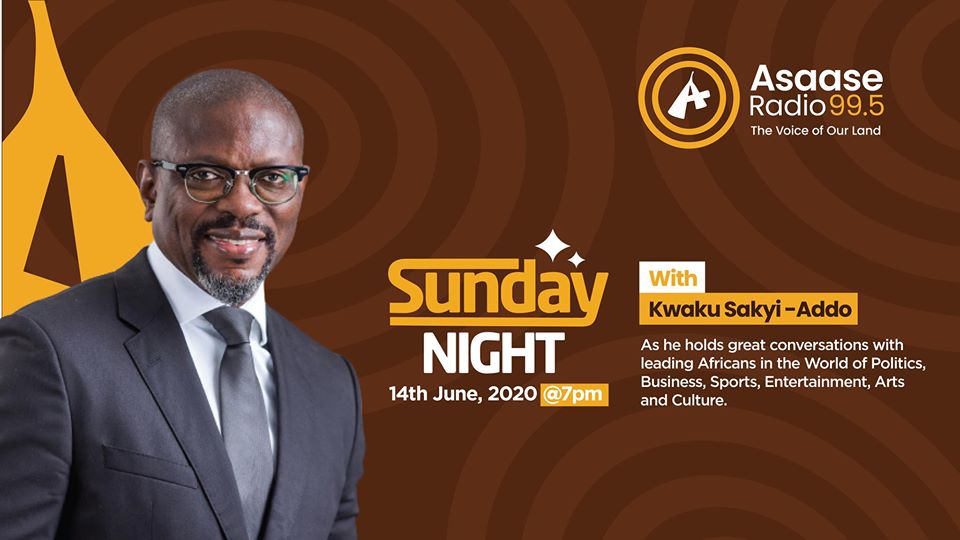 Journalist and Broadcaster, Kwaku Sakyi-Addo is the lastest addition to Asaase Radio.

The radio show, which combines personality and current affairs, will debut at 7pm on Sunday, June 14, 2020.

“Sunday Night” will feature Ghanaian, African and global newsmakers in conversation with Sakyi-Addo on a wide range of subjects, from Business, the Arts, Sports, through Science and Politics.

Sakyi-Addo hosted the current affairs shows Front Page and Newsfile for a combined sixteen years on Joy FM. He was also executive producer and host of Kwaku One-on-One, a head to head TV interview show on GTV and TV3 for ten years. He also hosted a live radio and television talk show, ‘The Lounge’ on Starr FM which was recorded for telecast on GhOne TV from 2016 to 2018.

“I’m happy to be associated with a station that promises to enrich its audiences on-air and online with world class content; a station worth waking up to and going to bed with,” the two-time Jour- nalist of the Year said, adding, “I look forward to working with the station’s superb production team so Sunday Night can contribute towards the vision of Asaase Radio.”

He was correspondent for the BBC from 1994-2007, alongside Reuters, the world’s largest news agency. He had previously been editor-in-chief of the Ghanaian Chronicle (1993-94) and Ghana News Agency reporter.

He has held exclusive interviews with a wide range of personalities, among them the last three Secretaries-General of the United Nations, and African leaders from Cyril Ramaphosa now South African President, to Liberia’s Charles Taylor currently in prison for war crimes.