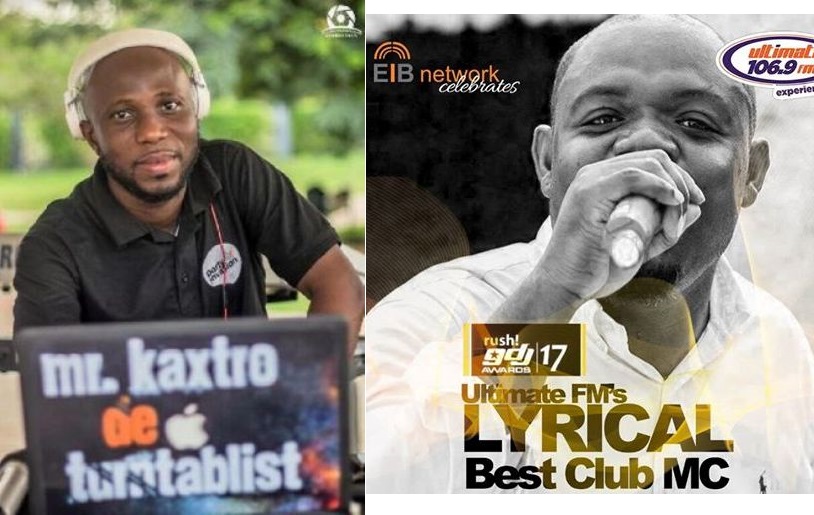 Ghana’s number one turnbalist and Ultimate FM’s head of music, Mr. Kaxtro known in real life as Fidel Idun Kuranchie has emerged as the Best DJ in the Ashanti region for the year 2017 at the just ended Rush Ghana DJ Awards.
Mr. Kaxtro beat the likes of DJ GFT, DJ Slim, DJ Aroma and DJ Chiefaro others to emerge winner in the Best DJ of the Year category in the Ashanti region.
Mr Kaxtro, has over the years been the official DJ for every major event in Kumasi and beyond and also been the only DJ to work with the dancehall champion, Shatta Wale whenever the artiste goes to perform at the Northern sector of the country.

During the year under review, Mr Kaxtro won the Best DJ of the Year, Ashanti Region at this year’s Foklex Media Awards. It could be recalled that the tuntablist won the Scratch DJ of the Year Award in last year’s edition of Ghana DJ Award.
Ultimate FM’s MC Lyrical known outside showbiz as Kelvin Adu Amoako has also been crowned as Ghana’s Best Club MC. He wrestled the award from the likes of Ogee The MC,Sheldon, Kojo Manuel, Mensah Jnr, Johnny Stone and MC Apiscola.

The Rush Ghana DJ Awards, which took place over the weekend at the MJ Grand Hotel inside East Legon, is an annual event which seeks to reward DJs who have remarkably entertained people and played a major role in music promotion in the year under review.
Both Mr Kaxtro and MC Lyrical have always held the station down with weekend flagship music show, Club Arena which runs on Fridays and Saturdays from 8pm -12 mid night which also features drive time show host of Ultimate FM, Foster Aggor. The show has undoubtedly endeared itself to listeners with ingenious tracks selection and making hits out of songs ranging from hiphop, hiplife, R&Bs etc, which hitherto weren’t heavily patronized by music lovers.